The Public Art Commission (PAC) is responsible for the City of Golden’s Art in Public Places Program. Public art creates a vibrant atmosphere that contributes to the quality and cultural identity of our community. It is inspired by a variety of goals including encouraging cultural expression and inspiring a sense of civic pride.

Artists bring a unique perspective to the built and natural landscape of our City and create memorable spaces for residents, businesses, and visitors. Enhancing the character of community through public art directly supports cultural tourism and economic development.

The PAC has the responsibility of promoting, selecting, acquiring and maintaining public art in the fulfillment of the City’s Art in Public Places program. View the entire collection of the City’s Public Art by visiting the Public Art page.

Opportunities for Artists and the Community

Do you have a great idea for public art in Golden? We want to hear from you. The PAC reviews proposals for art from the community and artists every April and October. Schedule a meeting with Robin Fleischmann via email at rfleischmann@cityofgolden.net to go over to your public art ideas. For more details read the Public Art Proposal Form

“We are very excited about this opportunity to highlight the talent of our local artists in these high traffic and high visibility locations.” said Eriq Hochuli, Curator for Foothills Art Center. “The signal boxes typically go unnoticed by passersby and in some cases they can be quite unsightly. Rather than taking measures to camouflage them further, we would like to re-purpose them as a showcase for artistic excellence.”

The selected artwork will be digitally transferred to vinyl overlays and professionally wrapped around the traffic signal box. The vinyl wraps are resistant to spray paint, markers, damage from adhesives, and can last up to five years. Look for the new installation in early 2020 and share photos of your favorite pieces on social media using #GoldenPAC. The traffic signal box project is a partnership between the Golden Public Art Commission and the Foothills Art Center.

Look for the signal box art in the following locations:

Golden’s newest art piece, “Run and Fly,” was recently installed on the west side of Hwy 93, north of Pine Ridge Road. The set of three eight-foot sculptures, created by artist Joe Norman, aims to serve as an entryway into the City from the north, providing a sense of arrival to Golden.  Be sure to check out the piece while driving both directions on Hwy 93, as the silhouettes appear to change depending on the view. Travelers heading northbound will see three red-tailed hawks, while those going southbound will see a group of children running together.

An exciting new addition to the artistic landscape in Golden along Washington Ave between 2nd and 5th Street is now complete. This new, 1000 ft long mural is the product of an 18-month long program that involved Foothills Art Center, Golden High School, Golden Rotary Club, and Denver artist, Jolt. The new mural was designed to addresses mental health issues in our community with an uplifting message about help, hope, and strength. The mural was jointly designed by students working along with the artist.
To learn more about the project visit sourcesofstrength.org.

A re-dedication ceremony for Golden’s impressive bronze statue called “Checkmate” was held  Oct. 1 as part of the celebration for the completion of the Linking Lookout project. Representatives from the City of Golden, the Public Art Commission, the Golden Civic Foundation and Golden Rotary Club were present.

In 2004, the Golden Public Art Partnership, the Golden Civic Foundation, and the Golden Rotary Club purchased and delivered “Checkmate” after Rotarian Bob Short discovered it in the lobby of the Adam’s Mark Hotel in Houston while on a business trip. In 2006, the piece was placed at a temporary location near Hwy 93 and Pine Ridge Road until it could be placed in its permanent location on the new 19th Street lid.

The 10-foot statue, created by renowned sculptor Herb Mignery, depicts a cowboy training a young horse. Mignery was born and raised on a family cattle ranch in Bartlett, NE. His works portray the spirit of the hard-working people of the West. He has received numerous awards and his work is featured in museums throughout the country. Mignery’s pieces can also be seen at the Gerald R. Ford Amphitheater in Vail, the Gateway project in St. Louis, and downtown Denver. 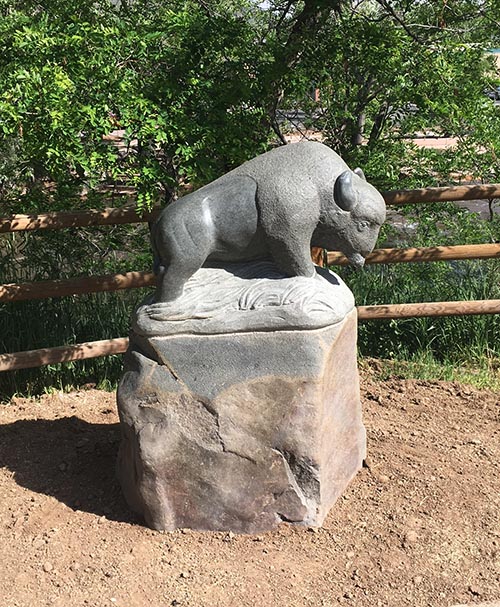 The PAC was attracted to the piece due to its strong ties to Golden’s heritage. The stone is from Golden – the same as the volcanic caprock on the two Table Mountains. Also, the piece’s title, “Shoshone Spirit”, refers to both a tribe that inhabited this region, as well as the geologic name of the rock, shoshonite (an unusual variety of basalt). In addition, buffalos have and continue to be a part of the Golden landscape as well as western themes and cultures.

Artist, William Gee, is a geologist who enjoys carving local wildlife. He lives just north of Golden, where the boulder to make Shoshone Spirit was found. Keller Farms donated the boulder, which serves as a base for the piece. 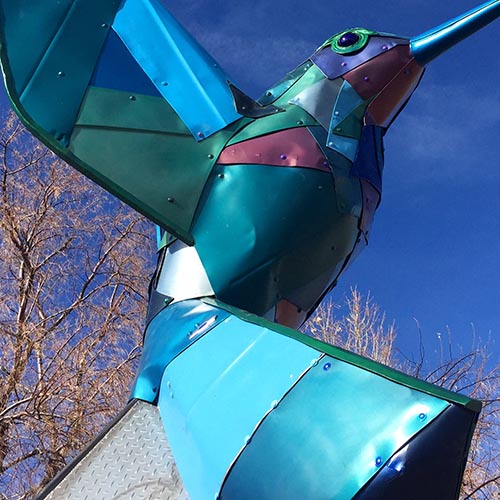 The Rocky Mountain Hummer has Landed

Golden’s newest and highly anticipated public art piece, Rocky Mountain Hummer, was installed at the Ulysses St roundabout near King Soopers on April 20. The 3,000 pound hummingbird stands about 15 feet tall on its pedestal, and is made of a patchwork of blue, green and purple sheets of steel and about 20 upcycled car hoods. Don Kennell, a metal sculptor of Santa Fe who grew up in Lakewood, was selected by the Public Art Commission (PAC) last fall to create a public art piece for this location.

The Clear Creek Trail behind the Golden Public Library is now home to 12, 2’ by 2’ diamond shaped medallions created by Roberto Delgado. The tiles feature more than 50 images of Goldenites past and present, historical pictures and news clippings, and photos of the community’s beautiful natural landscape. Take a stroll down the Clear Creek Trail and check out the vibrant tiles!

The Public Art Commission meets the first Thursday of each month at City Council Chambers, 911 10th Street, from 9 to 10:30 a.m. These meeting are open to the public.

The Commission is comprised of seven members, five of whom are citizen representatives.