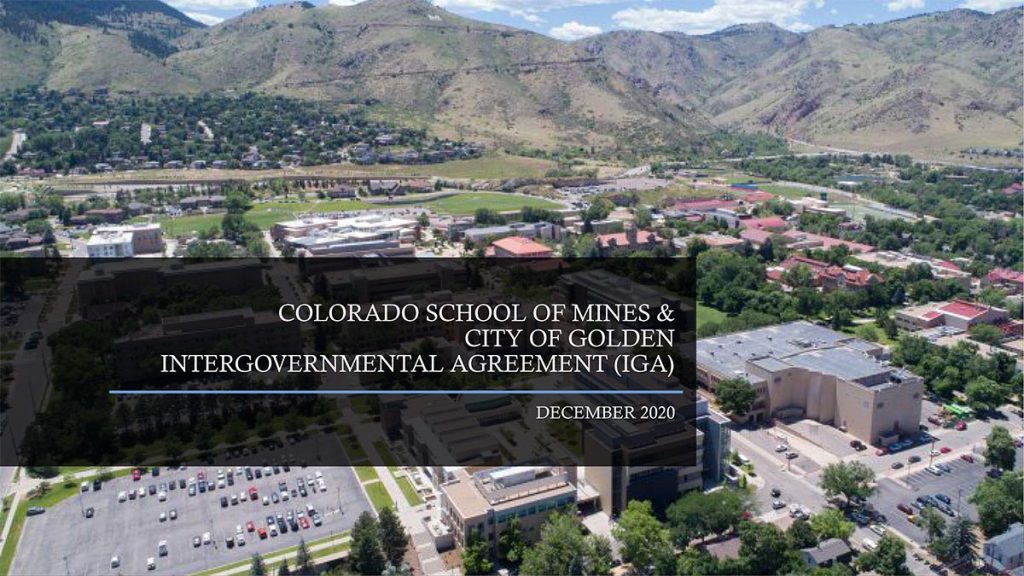 The concept of negotiating an Intergovernmental Agreement (IGA) between the City of Golden and Colorado School of Mines (Mines) was under discussion as early as 2015. At that time, it was thought that an approach where both the Golden community and Mines could anticipate future construction activities by Mines with a level of certainty and predictability might be preferable to the then current approach where Mines would go through the motions of the City’s land use process, while concurrently maintaining that the City had no jurisdiction over their land use or construction decisions. In 2017, the City conducted neighborhood planning efforts adjacent to the CSM campus. With the completion of the latest Mines Master Plan in 2019, City and Council directed staff to negotiate an IGA. The parties have developed a draft agreement, which incorporates the following points:

with the Colorado School of Mines. This IGA focuses on documenting the agreements between the City and Mines about how they will interact together on an on-going basis, including transportation, pedestrian and vehicular traffic and parking, drainage, and utilities. Some key features of this agreement are:

Is the City giving up the ability to assert the legal position that Mines is subject to Golden’s local land use regulations?

Can the City still try to enforce our land use regulations through court action, if desired?

Is the Agreement permanent?

What if one party wants to terminate the agreement?

Can the City enforce the provisions of the Agreement if Mines does not comply?

What benefits does the IGA offer to the City over current circumstances?

What risk does the City have in agreeing to the IGA?

Can the City take Mines to court now to clarify if local regulations can be enforced?

What is the current process if Mines wants to develop a property?

What is the process outlined in the IGA if Mines wants to develop a property, or amend its Master Plan?

How do other communities address similar issues between colleges and cities?

For any questions or more information contact Alex Mansfield Management Assistant at Amansfield@cityofgolden.net. 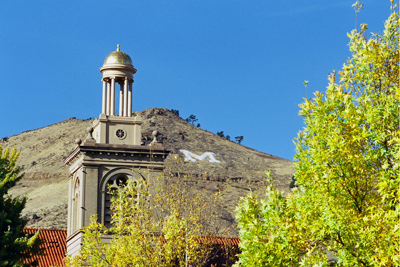 The Colorado School of Mines (Mines) has been an integral part of Golden throughout its history. Mines is a prestigious university that has not only brought students, faculty and staff to the community, but also jobs in the form of companies that have either started in Golden or relocated to Golden to be in close proximity to the talent it attracts. Mines and its adjacent neighborhoods have evolved side by side over the years. In recent years, Mines has constructed a number of new campus buildings. While many of these new structures are in the core of campus and do not represent a direct impact on the adjacent neighborhoods, some have been constructed on the edge of campus and have created challenges for residents.

For many years, Mines and the City have not agreed about the process for community review and input into campus construction. Mines has argued that its status as a state institution does not require compliance with local zoning ordinances, with the City maintaining that local zoning regulations must be followed. As a result, the process for community review and comment on Mines construction projects has been frustrating for all. Beginning in about 2015, there began to be consensus from residents that the status quo situation related to the Mines land-use entitlement process is not desirable and leads to ongoing contention, and that the City may be better off seeking to achieve an Intergovernmental Agreement (IGA) to better define the relationship between the City and Mines.

Mines and the City began to discuss a potential IGA in earnest in 2016 with a goal to establish building limits for campus edges that Mines would commit to, while future construction in the interior core of campus would be more discretionary for Mines. The City initiated an effort similar to the City’s traditional neighborhood planning effort to discuss the campus edges and interface with adjacent neighborhoods. Following the completion of this community discussion in 2017, the effort primarily related to coordinating with Mines’ proposed new Master Plan that would identify proposed construction throughout campus.

For most of 2019 and early 2020, discussions between Mines and City representatives focused on defining potential building locations and massing for the campus edges near Golden neighborhoods. The process was very detailed and finally resulted in the current draft IGA.