Once again, the winners of the Mayors Awards for Excellence represented the best Golden has to offer! See a list of the 2019 winners below.

Following Mayor Marjorie Sloan’s recognition of Goldenites who have contributed greatly to making a difference in the community, the Mayor’s Community Event presented Dr. Martín Carcasson as the evening’s keynote speaker.

Fighting Hunger at Mines – A unique campus group that is dedicated to improving the physical and mental health of students at Mines and the Golden community.

Golden United – A non-partisan, resident-driven effort to engage Golden area community members across all walks of life to find common ground and act with respect and dignity in strengthening the community.

Chad Wachs – Launched AU Wireless in 2015 with a handful of neighbors to see if he could create a low-cost community broadband system. Their proof-of-concept has since grown into a full-fledged co-op with more than 300 members using the service all over town.

Golden Lions Club – Serving the Golden community since 1942, they stand behind the International Lions Club motto of “We Serve”. The Lions Club offers their services to anyone that needs help with a project and have over 8,000 hours of volunteer service in 2019 alone.

Congratulations to the winners of the 2018 Mayor’s Awards for Excellence! The winners were picked based on their extraordinary contributions to the Golden community and to the Colorado School of Mines, and honored at a community event on Oct. 30. In addition to the Mayor’s Awards, Rep. Ed Perlmutter gave each awardee special Congressional recognition.

After the awards ceremony, guests listened to a dynamic speaker, John O’Leary, who had an amazing tale of tragedy and triumph that he transformed into an eloquent and emotional experience for the audience. 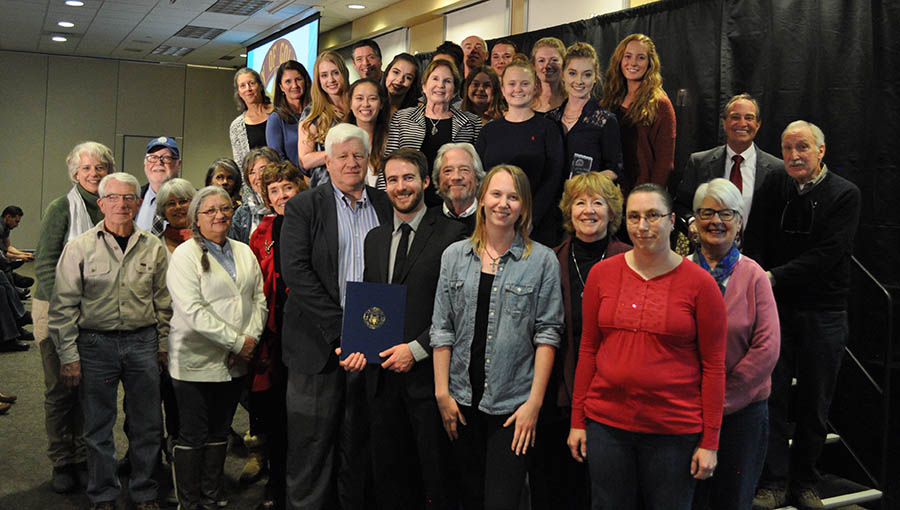 Kim Brock serves as the chairperson of the Golden Schools Foundation (GSF) and has implemented innovative programs like summer academic bootcamps at Bell Middle School and Golden High School, elementary tutoring programs, and the teaching excellence program. Under her leadership, GSF’s private donor funding has grown 182 percent and grant support has grown an impressive 940 percent. Additionally, Kim manages and oversees all aspects of the Golden Gallop – a community event that involves over 1,000 runners, 100 volunteers, and is the main fundraiser for GSF.

Carol and Don Cameron are models of good citizenship and community advocacy. They are passionate voices for conservation, sustainability, and biking. Their home has become a meeting place for those who share their legendary neighborhood garden. Carol chairs the Golden Optimists Bicycle Recycling Program. Don serves on the Golden Planning Commission and strives to bring more affordable housing to Golden.

The Lunch and Life Program has grown dramatically from its humble beginnings of about six students in 2000, to become one of the primary connections between Mines students, Calvary Episcopal Church, and the Golden community. During the fall and spring semesters, several hundred students from many nations and walks of life, enjoy a homemade meal in the ambiance of unconditional love and hospitality. To date, dedicated volunteers have served over 26,000 meals to students.

The Colorado School of Mines Dance Team for their contribution to the Golden community while representing Mines. With their hard work and dedication, the Mines Dance team has brought their spirit into all that they do. Not only are they involved with athletic events and campus appearances, they also participate in community events such as the Buffalo Bill Days parade and interact with community families during Nightmare on Greek Street.

Mayor Sloan and her Award Selection Committee once again received many nominations of amazing people doing great things for Golden! Narrowing the field down was a difficult task.

In 2017, the Community Celebration celebrated entrepreneurship and innovation. Please see the list of 2017 Mayor’s Awards for Excellence winners below.

Golden Mayor Marjorie Sloan honored two individuals, two couples and one student activity club for their outstanding contributions and commitment to the Golden Community at the Mayor’s 2016 Community Celebration, which was held on Tuesday, Oct. 25 at the Colorado School of Mines (CSM) Student Center.

Mayor Sloan and her Award Selection Committee were overwhelmed with more than two dozen nominations! Narrowing the field down was a difficult task. Below is a list of the winners. If you missed the event, you can still watch a video of the evening’s celebration to the right.

In 2016, the Community Celebration highlighted the city’s relationship with CSM. CSM President, Paul Johnson was on hand to congratulate the winners and introduced the keynote speaker, Marv Kay. Mr. Kay is a legend in Golden and on the CSM campus. He is a former Golden mayor as well as former CSM football coach and athletic director. Congressman Ed Perlmutter also joined the celebration.

The Mayor’s 2013 Community Event was held on Wednesday, September 25. On that day, Mayor Sloan honored four outstanding Goldenites. After the awards, guest speaker, Jason Roberts spoke. Jason Roberts is the founder of the Better Block Project. In 2010, Jason organized a series of “Better Block” projects, showcasing the potential of underutilized blocks in Southern Dallas. The project has now become an international movement and already some Colorado communities have taken part.

The Better Block approach calls on community volunteers to temporarily transform an area into a vibrant destination with pop-up businesses, bike lanes, pedestrian walkways, café seating and landscaping. The lasting result is a vision for a vital, inviting public space and the momentum to make the changes permanent.

Golden Mayor Marjorie Sloan extends her congratulations to seven Golden residents who have made exceptional contributions to our community. Each honoree was presented a 2012 Mayor’s Award for Excellence in October.

In evaluating nominees for these awards, a committee considered factors such as taking initiative, exercising leadership, solving community problems, creating community value and serving as a role model.

In addition to the individual awards, the Mayor presented an award for Business of the Year based on qualities like entrepreneurial spirit and success, innovation, job creation in Golden and civic contributions.