Located near downtown Golden, Station 21 was constructed in 1960 along with the city government building.

Station 21 originally had three apparatus bays facing 10th Street and three bays to the rear of the building. Up to that time the Golden Fire Department had been using the Central Fire Station, which had been built in 1883, to house all their apparatus. On May 6, 1961 with Fire Chief Harry Stokes in the lead, 40 members of the Golden Volunteer Fire Department met at the old Central Fire Station for the last time, and marched in parade dress to their new quarters at Fire Station No. 1 in Golden’s Municipal Center at 10th Street Washington Avenue.

The Loveland Station, built in 1927 and remodeled in 1956, was only used for fire department business meetings. In the early 1970s the Golden Fire Department sold the Loveland Station to the American Legion. The proceeds of the sale were used to build the Tower bay, meeting room and offices at Station 21. This station served District 1 until July 2007.

The City of Golden’s budget process for 2007-2008 began in late 2006. During the planning phase the replacement of fire station 21 became a priority. Three possibilities existed:

The recommendation became demolish and rebuild on the existing site.The City Council approved the funding from various sources and in July 2007 the Administration Offices and Fire Station were relocated temporarily to the vacated City Shops complex at 1465 10th Street Hauser Architects P.C. designed the new facility and Golden Triangle Construction, Inc. was the general contractor for the project. Demolition began in September 2007 and the Fire Department operated for the next nine months from the temporary site. In mid-April 2008 the new Fire Administration Station 21 was completed. Fire Administration completed the move back in April 2008 and six fire apparatus moved in on May 2, 2008 and the facility became fully operational with the first duty shift working on May 2, 2008.

The new facility houses the Fire Administration offices, a state-of-the-art learning and computer center and living quarters for up to eight firefighters. The station will also house six apparatus including; two engine companies, one ladder/tower company, one heavy rescue company, one brush truck and a water rescue apparatus.

The facility was planned to provide administrative and fire/rescue services to the City of Golden for the next 40-50 years. The department is extremely proud of this new facility and gratefully acknowledge the support from the City Council, the City of Golden and all staff and members of the Golden Fire Department.

Engine 22 responds to all types of emergencies within District 1 as a second due engine company. This apparatus is also a reserve engine for the entire city. 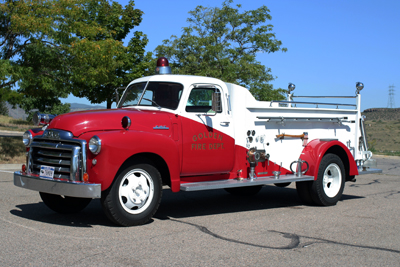 The Golden Fire Department has a very rich history and part of their efforts to keep that history alive is in their 1948 GMC/Darley Champion pumper.

Equipped with a 500 gpm pump and 200-gallon booster tank, this rig has been restored by the Department twice. The most recent restoration saw the unit returned to its original livery featuring a unique red and white paint scheme. The rig is completely functional and routinely participates in public relations events.