Station 22 has a small office and storage area. 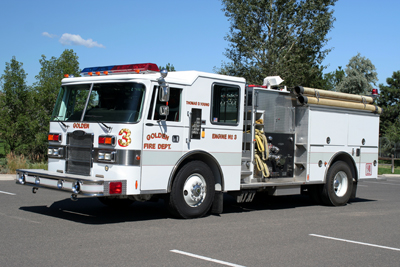 Engine 23 is a reserve engine to back up Engine 21, Engine 22 and Engine 24 as needed. This apparatus is also used by the Training Division.

Engine 23 features a dedication on the side of the cab to Thomas D. Young. Tom joined the Golden Fire Department as a volunteer in 1982. In 1989 he was hired as the Fire Inspector. Young was the first paid Fire Department Manager, promoted from Fire Inspector to Manager early in 1990 to assist the volunteer Chief with the operation of the department. In July 1990, Young was critically injured during the rescue of a downed hang glider pilot. His injuries left him paralyzed from the neck down. Today, Young is the volunteer administrative Captain of the Department’s Media Services.

Rescue 22 is a reserve rescue apparatus to back up Rescue 21 or Truck 24 as needed. This apparatus is also used by the Training Division.