Construction began on the long awaited intersection of US 6 and 19th Street on February 8, 2016 and completed in late 2017. The City of Golden partnered with the Colorado Department of Transportation (CDOT) to make the project come to fruition.

CDOT is in charge of most of the major road construction projects on highways throughout Colorado, so you can imagine that this project is not one of their largest. However, for us here in Golden, this was a big fish in our small pond.

The US 6 & 19th Street project was named “Linking Lookout” so anywhere you see those two words, you’ll find information on the project. Linking Lookout was chosen to represent what the project is now bringing to our community… a beautiful and user-friendly path between downtown Golden and the communities at the base of Lookout Mountain. In essence, we are “linking” Golden to Lookout to help bikers, pedestrians and cars cross over US 6 safely without hindering the flow of traffic.

Muller Engineering performed a traffic evaluation of traffic performance of the completed intersection and compared it to the traffic performance prior to construction. That report is available for download below. It does have a lot of engineering jargon so here is a summary of the findings:

And, it’s open! The ribbon has officially been cut on the Linking Lookout project!

Watch the Interchange function with traffic projected in 2035. 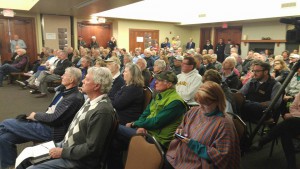 Throughout the planning process, we worked hard to gather community input. We hosted many open houses to review plans and get feedback. Just before groundbreaking, the City hosted a community meeting to explain the project in its entirety. If you missed the meeting, you can watch it by going to the Community Meetings page. Also, check out the FAQ page, which answers all of the questions asked by the public.