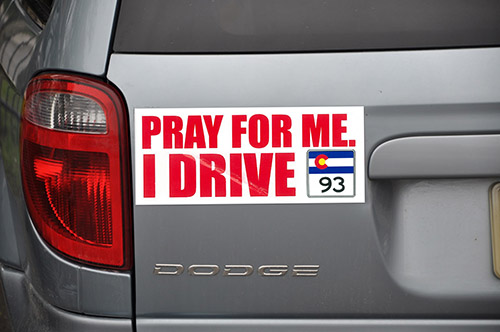 This project comes after a very long and often contentious history of highway planning along the US 6 and SH 93 corridor. Planning for a regional beltway dates back as far as the 1960’s, but Golden didn’t get seriously involved about the corridor until the 1980’s, with the planning and construction on C-470 beginning at I-70, traveling south and east to I-25. This is a highway that had been stopped by former Governor Dick Lamm in the 1970’s. Golden had unsuccessfully asked that that highway start slightly to the north at US 6 to alleviate traffic that was using Heritage Road. 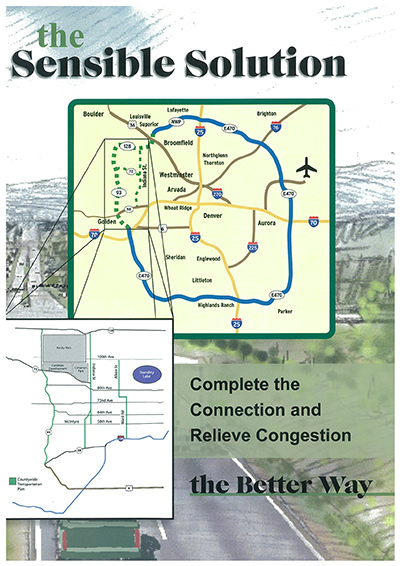 The next try to complete a high speed highway through Golden occurred in the late 1980’s with the W-470 toll road project. This road was to “complete the beltway” from C-470 north and east to I-25. The project needed some minimal support: a $10 annual vehicle registration fee in the corridor. This fee was part of an election in 1989 which lost 5 to 1.
After the defeat of W-470 there was a short lived effort led through Jefferson County to build a parkway, but it died when there was no consensus formed to include the highway in the mid 1998 update of the Jefferson County Transportation Plan. This led to the County, and the cities of Arvada, Lakewood, Wheat Ridge, Golden and Westminster launching the Northwest Corridor transportation study. This study was conducted by transportation engineering consultant CH2MHill. After two years of public meetings, alternatives study and traffic modeling, the final report was released in 2000 and recommended significant improvements along two corridors, US 6/SH 93 and Indiana/McIntyre.

Golden had been looking at the impacts to the community from a major regional highway, and the major concerns were from noise and the division that a major highway makes between parts of the community. The community used the recommendations from the CH2MHill to develop a highway plan through Golden that was sufficient for traffic, but able to fully mitigate the highway’s impacts. This resulted in the Golden Plan, first published in 2003. This plan has slower speeds, 45 mph to mitigate noise, four lanes instead of six, (which the CH2MHill study said would be sufficient) and covered sections and interchanges to keep a highway from becoming a barrier in our community.
While Golden was working on the developing the Golden Plan, the region still believed that the completion of the beltway was critical. An eleven mile section from I-25 to almost US 36 was built as a public toll road, the Northwest Parkway which opened in 2003. This highway was later privatized when toll revenue failed to meet expectations through a 99 year lease to a private operator. 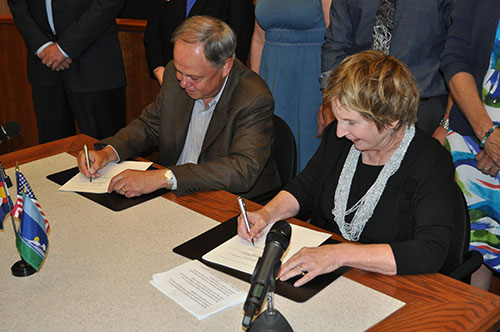 In 2002, Arvada and Jefferson County created the Jefferson Parkway Authority to build the beltway segment from SH 128 to SH 93. The authority put its efforts on hold in 2003 when the Colorado Tolling Enterprise funded a study to complete the beltway from the Northwest Parkway to C-470. Golden participated in that effort, and was opposed to the recommended findings, a six-lane 70 mph highway through Golden along the US 6 and SH 93 corridor. This effort was shelved in 2008 by the state when environmental approvals could not be obtained because there was no highway funding.

When the state effort ended, the Jefferson Parkway Authority picked up its effort to complete the section from 128 to 93, and the state continued to look at developing a private-public partnership that could complete the highway. In 2012, Golden began discussions with the state concerning bringing a highway through the community. This time the state spent time with Golden to understand our highway concerns. A compromise was found that limited the highway to existing speeds, 45 and 55 mph through Golden and limited the number of lanes to four unless traffic volumes rose to certain levels. It also guaranteed the expanded intersections and covered sections, to prevent the highway from becoming a barrier. In addition, the agreement stipulated that existing free highway lanes remain free, while any new lanes could be tolled under a managed lane program.
The City held a series of public meetings around the proposed compromise which lead to an update of the Golden plan in 2013 and a Memorandum of Understanding (MOU) with the Colorado Department of Transportation (CDOT) that defined regional highway improvement designs through Golden.

This plan was further codified During the WestConnect Planning and Environmental Linkage (PEL) study conducted by the communities on the west side of the metro area and CDOT. This document shows the Golden plan as the long term transportation solution through Golden. 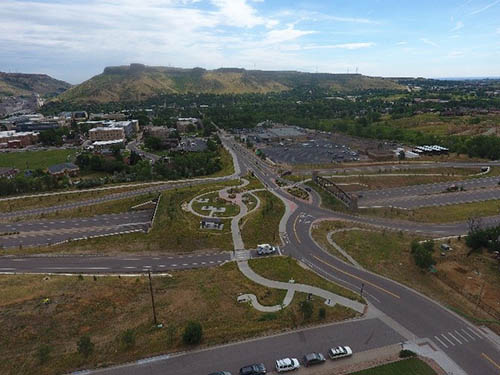 In late 2013, the State announced a grant program to fund highway improvements and Golden applied for and received a $20 million grant to complete an interchange at US 6 and 19th street. The grant required a 20 percent match, so Golden pledged $4 million to the project, and the Colorado School of Mines added the additional $1 million. In May of 2014, Golden signed an agreement with CDOT for the grant, and began project design, and environmental clearances.

In January 2016, a long journey to the beginning of the first project included in the Golden Plan, a project that we expect will make a significant improvement to one part of Golden along this regional highway corridor. The US 6 and 19th Street interchange was completed in 2018 and has greatly improved the intersection, safety and appeal to all who use it.