Gateway to the West!

Golden, Colorado is today rich with culture, outdoor activities, scenic beauty, thriving businesses, and friendly people, but the city’s origins are largely thanks to another valuable resource – gold. A small amount of gold discovered in Clear Creek attracted the area’s earliest settlers in the mid-19th century and Golden City quickly become an important supply stop for gold miners seeking their fortunes in the adjacent mountains. Farmers soon discovered the rich soil in the valley that is now home to the Coors complex, and Golden City further swelled as coal mining and clay extraction industries settled in the area, utilizing the region’s ample natural resources.

Golden City became the capital of the federally recognized Colorado Territory in 1862, and the territorial legislature met from 1862 to 1867 in the building that is now home to the Old Capitol Grill restaurant. By the end of the 1860s, Golden City had been elected the seat of Jefferson County and the capital of the provisional Jefferson Territory. Locals were outraged when neighboring Denver snagged the honor of becoming capital of the newly formed state in 1876, but the loss of name distinction did nothing to dampen Golden’s vital growth – business was booming. 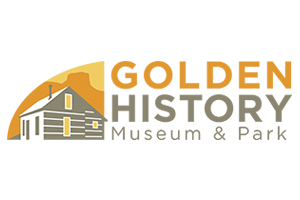 To view more historic photos of Golden and other Golden artifacts, visit the amazing online collection at GoldenHistory.org.

A Center of Industry and Science

Golden came to be known as the “Lowell of the West” for its vigorous industrial growth. In the 1870s, Golden boasted five smelters running at once, four flour mills, and the Colorado Central Railroad was built, becoming the first railway to access the mountains to the west. Golden Paper Mill opened in 1867 producing paper from discarded rags and straw, and held the distinction of being the only paper mill west of Missouri. Coal mining continued to be an important industry in the region through the 1930s, and clay quarries fueled the production of pottery, porcelain, bricks and tile in the region. Golden’s brick making industry thrived for nearly a century, exporting product as far as China. In 1873, Adolph Coors opened a brewery in an old tannery building, taking advantage of the mountain spring waters of Clear Creek. Today the Coors plant in Golden is the largest single brewery facility in the world, and remains a vital part of Golden’s business landscape. From beer to confections, Golden also holds the distinction of being home to Jolly Rancher candies, which were first created in 1949 by Bill and Dorothy  Harmsen who owned a chocolate and ice cream shop at 1113 Washington Avenue in downtown Golden.

While industry was booming in Golden, the city was also becoming an important center of intellectual development. Golden became home to three institutions of higher learning in the 1870s. Of the three original schools, Jarvis Hall, Matthews Hall, and Colorado School of Mines, only the latter survived, and today operates as an important public teaching and research institution in Golden. Specializing in engineering and applied science, Colorado School of Mines (CSM) was ranked 29th in the nation among national public universities and top in terms of salary potential for graduates. CSM serves as the home base of the National Earthquake Information Center, which is part of the United State Geological Survey, and tracks seismic data around the globe. While not directly affiliated with CSM, the National Renewable Energy Laboratory (NREL) is also located in Golden and contributes to the city’s renown in the applied sciences. Founded in 1974 by the Carter administration under a different name, the NREL now serves as the country’s primary laboratory for renewable energy and energy efficiency research and development.

Golden in the 20th Century

The 1920s brought downtown revitalization projects to Golden with streetscaping, an ornamental lighting project, urban renewal to the north and east, and new senior high and grade school buildings. The years following World War II saw a major boom in Golden, which almost tripled in geographic size in 1959 with the annexation of large properties to the south. New subdivisions went up, public infrastructure was modernized, including new public buildings, and the downtown corridor proliferated with grocery stores, department stores, and churches.

Golden continued to thrive until the 1980s, when it fell on hard times due to a decline in the price of petroleum and the almost simultaneous failure of several downtown anchors. The Golden Urban Renewal Authority was created at that time and tasked with stimulating business and undertaking new downtown revitalization initiatives. The 1990s saw the benefits of those new initiatives, and Golden again began to thrive.

Golden continues to grow and prosper into the 21st century. In 2009, the City of Golden was awarded a $100,000 Heart & Soul Community Planning grant through the Orton Family Foundation. The Golden Vision 2030 project and document was developed with extensive community input in response to the grant as a roadmap forward in guiding Golden’s growth. Through the Golden Vision 2030 project, key community values were identified, including all the things that make the city such a special place to live and visit. Golden is a unique community featuring easy access to Denver to the east, and the mountains to the west, while maintaining its own identity as a close-knit community with historic roots.

Today Golden boasts a population of more than 18,000 people and growing.

Interested in learning more about the colorful history of the City of Golden? Visit the Golden History Museum, or read on to learn about the early days of the Golden Fire Department!