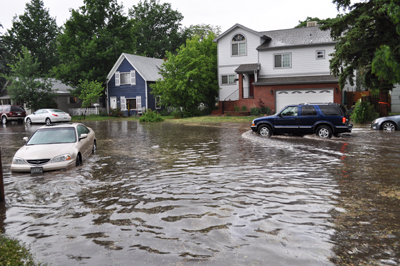 In the United States, flash floods are responsible for more deaths than any other thunderstorm phenomenon. Year to year in Colorado, only lightning is more deadly. Flash flooding usually is the result of very heavy rain in a short period of time overa small area, which causes small streams to rage out of control, out of their banks.

It is hard to imagine the destructive force of moving water, but the result was clear to see after the Big Thompson Canyon Flood of July 31, 1976. That flood killed 145 people, destroyed 418 homes and 52 businesses, and resulted in $35 million in damage. Survivors spoke of a wall of churning water racing down the canyon, an incredibly rapid rise in water level, and a loud roar. There was no way to outrace the water down the canyon, even with a vehicle. The only safety was found by climbing the steep canyon walls.

Flooding in Colorado can also result in the Spring when the mountain snowpack melts. Flooding of rivers and streams usually only occurs, though, when the snow run-off coincides with widespread heavy rainfall, but swift and high (non-flooding) water can be a definite safety hazard to rafters and other water enthusiasts.

If a dam fails, flash flooding will likely result. The destruction from flash flooding in July 1982 following the Long Lake Dam failure is preserved for all to see in Rocky Mountain National Park.

Keeping Yourself Safe From Flash Flooding