All Things Recycling: A Community Conversation About Waste Diversion in Golden

The City of Golden Community Sustainability Advisory Board (CSAB) recently held the All Things Recycling community event at the Buffalo Rose. Attendees had the opportunity to hear the latest information from industry experts about where our materials go, recent changes in the industry, and how families can participate in organic waste collection and other waste diversion programs. If you missed the event, check out the video from the presentations and Q & A session. 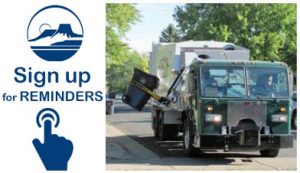 The City of Golden has a new way to keep you informed about holiday and weather delays in services of the City’s waste & recycling program. You can now sign up to receive email reminders about one day delays for holiday weeks and severe weather notifications that may affect your recycling and garbage collection. This new service is free and only requires an email address, but is only for City of Golden program customers.

The City of Golden now offers curbside appliance recycling to all single family and townhomes in Golden.

Acceptable appliances are limited to full size: washing machines, dryers, dishwashers, refrigerators, freezers, and stove/ovens. Items not listed here (including microwave ovens and small refrigerators) are not allowed and will not be picked up.

Appliances should be set out in a driveway or in front or side areas of the yard not impeded by a fence or gate. Please do not place items in the street or sidewalk.

Each appliance must be clearly labeled, “FOR CITY OF GOLDEN RECYCLING”.

Pickup is the following TUESDAY for calls received by Thursday of the prior week. Calls received after Thursday will be scheduled for the next week. City staff will call to confirm the date.

Please remember that your address needs to be within the City limits of Golden to use this service. To find out if your address qualifies, use the Jefferson County Address Wizard.

New Compost Service Open to All Households in Golden

You may already know that the City has contracted Alpine Waste & Recycling for collection services for the next five years.  What you might not know is that Yard Waste collection is better than ever.

Thank you for participating in the Golden Organics Program. Your efforts to keep printed material out of the trash help divert waste from the landfill.  You are making a difference in protecting our community and environment!

PAYT, or variable-rate pricing, is based on the concept that households are billed for the collection of trash based on the amount that they throw away. Recycling service is included in the cost and the more material you divert to the recycle bin, the less you pay for monthly trash service. More information on the current program can be found in the Resident’s Guide.

History of PAYT in Golden

In 2007 the City embarked on a sustainability initiative. A public town hall meeting was held and seven community working groups were organized to address sustainability issues in several areas. The seven groups covered areas that included building, economic health, education and communications, energy, solid waste and recycling, transportation and water. These groups then made recommendations to City Council for changes that would help make Golden more sustainable and establish sustainability goals in each of the seven areas. By August of 2007, City Council had passed a resolution that established specific goals for each area of sustainability. The specific goal for solid waste and recycling is to reduce Golden’s solid waste stream contribution by 25% by 2017.

In May 2010, City Council changed residential waste collection services in Golden by allowing the City to contract for waste and recycling services for some residential properties. In June 2015, City Council reissued a new five-year waste hauling contract and selected GFL Environmental (formerly Alpine Waste & Recycling). GFL Environmental was chosen for their low prices and ability to provide current and future services required by the Golden community. Starting September 1, 2015, rates increased a modest 9% and more benefits were added to the optional green waste program. Now every household in the city may subscribe to the year round, bi-weekly green waste service. Kitchen waste is now accepted in the green waste cart.

On November 13, 2014, the Golden City Council approved Ordinance 1991 to expand Pay-As-You-Throw (PAYT) waste & recycling collection to all residential areas in Golden.  This ordinance affects Homeowner Associations, Multi-family areas and Commercial properties.  By January 1, 2016, all waste haulers are required to submit documentation showing compliance as part of the City’s licensing regulations, which provide for the following:

For more information on the PAYT program, view the Colorado Association for Recycling Case Study

How would this affect me?

I am in a Homeowners Association with curbside service, but not enrolled in the City’s program.

I am in a Multi-Family (condos, apartments) Complex served by Dumpsters

The single hauler contract serves approximately 4,400 residential households in Golden and was approved following a large outreach campaign designed to ask Golden citizens their preference for additional trash services. The year and a half process included the following:

This Month’s Tip for Increasing Recycling