The application for boards and commissions vacancies opens on Feb. 1 and will close March 3 at 5 p.m. Visit our How to Apply page for more information on available vacancies.

Interviews will be conducted by the Golden City Council Boards and Commissions Subcommittee.Apply Now » 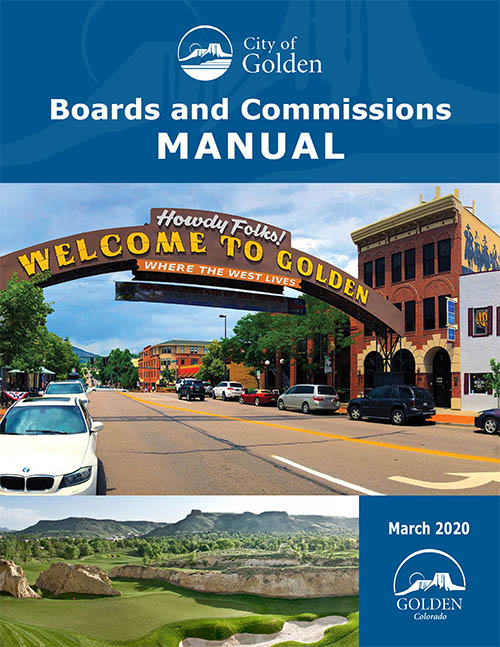 The Golden City Council encourages citizen participation in municipal government and welcomes your interest in serving on a city board, commission or committee.

The Community Sustainability Advisory Board (CSAB) was formed in 2007 to assist the City in achieving the ten-year sustainability goals set by City Council in Resolution 2047. The seven members of the board are appointed by the Mayor and confirmed by a majority of the City Council.

The Downtown Development Authority was established in 2014 as a special district entity to benefit the economic and community vitality of the downtown area. Beginning in mid 2014, the DDA began to take over downtown benefit programs from the Golden Urban Renewal Authority (GURA), which continued to focus on other URA project areas.

Golden Urban Renewal Authority (GURA) was established in 1989 and has been involved in the vitality of the Central Business District ever since. The board offers information and services to the business community, including some financial initiatives, educational opportunities, and consulting services to businesses in the area to help them improve sales and cash flow. GURA consists of a seven-member board appointed by the Mayor, with majority confirmation by the City Council, for five-year terms. GURA also has three full-time staff members.

The Historic Preservation Board is responsible for evaluating and preserving the rich historical, architectural and cultural heritage of the City of Golden. The board consists of seven members and one alternate who are appointed by the Mayor, and confirmed by a majority vote of the City Council.

The Local Liquor Licensing Authority meets on the fourth Wednesday of each month, unless otherwise noted. Obtaining a liquor license in the City of Golden is a privilege, not a right. Liquor licenses are issued by the State and the City of Golden. The City cannot issue the local license until the State has reviewed and approved the application and issued the State license.

The Mobility & Transportation Advisory Board was established in 2017 as an advisory board focused on transportation and transit issues within the city. The board is made up of seven members, each of whom is a resident of the City. The board’s recommendations contribute to community and neighborhood plans prepared by the Planning Commission and to policy and strategic decisions of City Council.

The Parks, Recreation & Museums Advisory Board was created in 1982, and board members are appointed by City Council, representing Golden citizens. The Parks, Recreation & Museums Advisory Board consists of seven members and one alternate, which serve four-year terms. The board makes suggestions about policies and procedures, fees and charges, acceptance of park land, design of parks, and other projects relating to the Parks and Recreation Department.

The Economic Development Commission (EDComm) was established by Golden City Council in June of 1999. Each member has a broad base of professional and complementary expertise in the fields of finance, advertising, retail, and economic development. The Commission’s duties include developing a structure and strategy for marketing/promoting the Golden community. Membership is for staggered four year terms.

The Planning Commission, established in 1948, affords residents the opportunity to actively participate in the planning of the City and its welfare. The Commission is comprised of seven members and one alternate of four year terms. The Chairperson and Vice Chairperson are selected from within the Commission by its members.

The Public Art Commission, established in 2013, affords residents the opportunity to actively participate in creating a vibrant and appealing atmosphere that contributes to the quality and identity of the City of Golden, through public art.

The Citizens Budget Advisory Committee (CBAC) was created by the City Manager to advise City staff on the development, implementation, and evaluation of the annual City budget. Participation in CBAC is an opportunity not only to advise on the prioritization of how City tax dollars are spent, but also to advise our policymakers in their decision-making process.